It’s shopping time. Many people, especially in the northern hemisphere, participated in Black Friday and Cyber â€‹â€‹Monday in preparation for Christmas. For many, the 2021 shopping experience also reflects a return to normalcy in a time of endless waves of COVID-19 infections and lockdowns.

Urbanization will also continue steadily throughout this decade. People are moving from villages to cities to find better education, health care and jobs. In addition, in emerging markets, old villages contribute to urbanization as they develop rapidly to the point of representing a peri-urban segment. These are often the new suburbs of the world’s mega-cities such as Jakarta, Mexico City, Mumbai, SÃ£o Paulo or Lagos.

Urban areas are more prosperous than rural areas. Proximity generates innovation and allows economies of scale. In “Triumph of the City”, Edward Glaeser showed that cities are healthier, richer and better for the environment because a higher population density makes it possible to produce new goods and services on a large scale and therefore at a lower cost. for everyone. This is also why most of the world’s consumers now live in cities.

To estimate the urban consumer class, we use the UN’s urbanization projections as well as education and income measures and examine how personal spending depends on each of these factors, particularly urbanization. Projections for India are derived from survey microdata for the country. 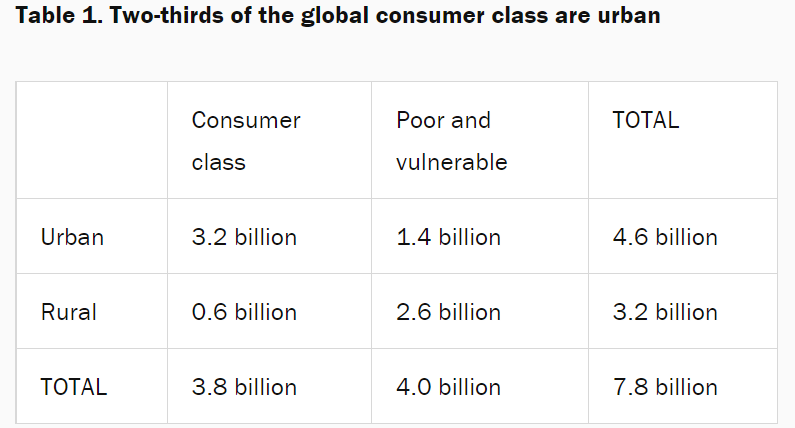 However, the distribution is uneven across countries, as many emerging markets are still predominantly rural. In OECD countries, almost everyone is part of the consumer class. As OECD economies are highly urbanized, around 80% of the OECD consumer class is urban. The same is true for emerging markets and developing countries, but for different reasons. The poorest countries are still predominantly rural, but only a very small portion of rural people are in the consumer class. This means that among the poorest economies, around 80 percent of consumers also live in urban areas. In Asia, where urbanization is advancing rapidly, the urban consumer class dominates with 1.7 billion people, representing about 54% of the world class of urban consumers. The Asian consumer class is not only growing in China and India. There are also several emerging markets that are under the radar, particularly Indonesia, Bangladesh, Pakistan, the Philippines, and Vietnam.

The number of consumers in India and around the world. Image: World Data Lab projections.

Many of us will enjoy the holiday season of the year as we look back on two difficult years dominated by the COVID-19 pandemic. Despite the massive economic impact of COVID-19 in 2020, its impact has only been temporary. The fundamental forces of global megatrends will shape this decade and they will be most visible in Asia.
Source: World Economic Forum

Shaista Fatima/ New Delhi S. Y. Quraishi, former Chief Electoral Commissioner of India who authored the book “The demographic myth on India’s demographic changes says that Muslims in India are rapidly catching up in family planning and have debunked the theory and propaganda that “Muslims are taking over India in terms of population […]

Hasnat M Alamgir | Published: August 05, 2022 20:32:04 Bangladesh needs to find and develop appropriate models to provide care for its growing aging population. Old houses were built here, but the complete residential isolation of elderly parents and living with strangers was not much appreciated by their family members due to the social, cultural […]